I have kept you guys waiting for a long time, but it’s finally here:

If you’re new to BrewPi, here’s a quick overview:

BrewPi is an open source temperature controller for brewing based on Raspberry Pi and Arduino. The Arduino can even run standalone, so if your Pi crashes your beer is still safe. But the combination of both systems gives you the best of both worlds: stability, a fancy web interface and data logging.

In this post I will outline the biggest changes that come with BrewPi 0.2.

The shields got an update with 3 big changes:

You can still order the BrewPi Arduino shield as a kit or fully assembled.

The case also got an update: the Raspberry Pi case now has a big BrewPi logo on top and can be mounted in different orientations. The new BrewPi case in action, photo by Tim Malmstrom

I worked very closely with Matthew on this release I am very thankful for the many, many hours he put in. I could not have written this code myself. Apart from his code contributions he has also been a great support on the forums, the IRC channel and the Wiki!

To give you an idea of how much work went into this: the new Arduino codebase counts 7378 lines of code vs 3386 in the previous release (counted by CLOC). The changes were spread over 309 commits! And that is just the Arduino repository by the way.

The biggest task however, was trying to squeeze all this new functionality into the Arduino Leonardo. Due to its native USB capabilities it has a bigger bootloader AND bigger includes for serial. This means that out of the 32kB total, the Leonardo has 6kB less space for your own code!

We basically refactored every file in the repository to squeeze every byte we could find. This means there is not much size optimization left and we might not be able to support the Leonardo for all new features in a next release due to code size constraints.

Right, back to the device manager: I have added a new tab in the web interface that lets you setup your devices. It automatically discovers OneWire devices and pins that have a terminal on your shield. But you can define your own pins too, just click ‘add new device’. So RevA shield owners can get the exact same functionality as revC users, they just have to add the connector themselves :).

Here is screenshot of the device manager, with all devices installed: Here is a device list with all devices installed. You can leave out any device you don’t have.

In the web interface, you can assign a device to a chamber/beer and assign it a function. You can also set whether the pin should be inverted or not. Right now, you can only choose Chamber 1 and Beer 1, but we are preparing ourselves for multi-beer and multi-chamber setups!

The plan is to support for example having 2 beers fermenting at the same time in one fridge: the fridge is set to the average or minimum temperature required by both beers. The beers can also get their own private heater, so the fridge can cool for the minimum of both but the other beer can adjust by heating separately.

With the new device manager, you have the option to install more devices that just 2 temperature sensors, a heater and a cooler. The following new devices have been added:

While the Google Annotated Timeline charts were a great starting point 2 years ago, they sure had their downsides: no customization, a bit slow to load and not supported by iOS. I have been wanting to replace them for a long time, but again Matthew took the initiative and found dygraphs: a JavaScript and HTML based chart library with great features. After he coded the core bits to replace the Google chart, I did the finishing touches.

Dygraphs supports Google’s data format, so it will still display your old beers. Dygraph loads much faster, supports horizontal and vertical zooming (pinch to zoom on phones and tablets!), and supports a custom interaction model. What we have now is just the ability to toggle the lines on and off, but we will improve on that for the next release.

With Dygraphs we also added a nice way to show what the fridge is doing: cooling, heating, idle or waiting. This is displayed by a colored bar at the bottom of the graph. Here you can see dygraph in action in the ‘previous beers’ tab. I don’t have a brew going now (too busy coding 🙁 ) so this test run is the best I can show. The buttons on the right can toggle each of the lines in the chart. With the fridge temperatures disabled, it can be much easier to see how your beer is doing 🙂 With dygraph, you can just click and drag to zoom Better info on what your fridge is doing

BrewPi has as a quite advanced temperature control algorithm: it calculates a PID value from the proportional error, integral and derivative of the beer temperature and adds this to the beer setting to get a fridge temperature. With a predictive on/off algorithm the fridge tries to hit that target. There are also time limits for switching and cycling to not break your compressor and save power.

While the previous release just displayed heating, cooling or idle on the LCD, BrewPi 0.2 displays things like ‘Waiting to cool’ with a countdown timer.

So you don’t have to wonder why your fridge is not turning on anymore. You can also see the actual PID values on the ‘control algorithm’. For an overview of the states, see the last screenshot of dygraphs above. 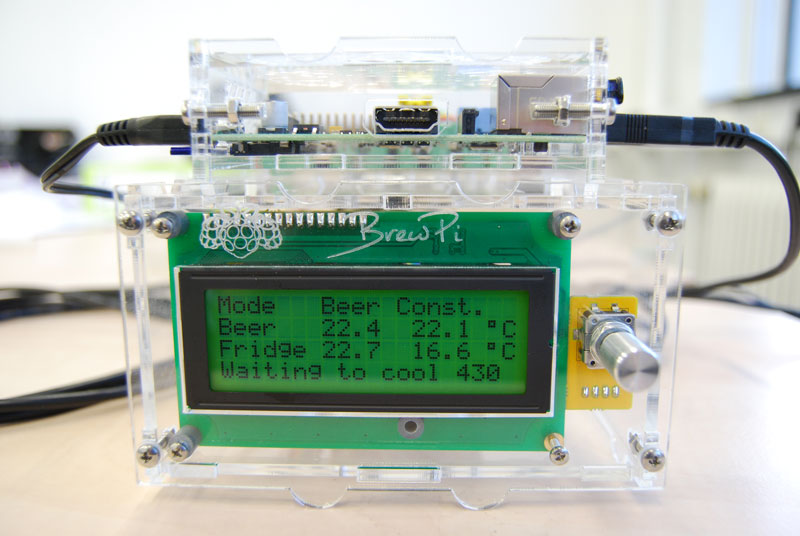 Better programming from the web interface with settings restore

The programming script got a big overhaul to make it more robust and give more feedback. Updating your Arduino should be a breeze now!

Programming is a one-pager now and the log is automatically refreshed every second so you can watch the progress. All your settings and devices are restored where possible and they are backed up to a file.

Matthew also set up a build server to automate compiling the AVR code for every possible Arduino and shield combination (I’m so lucky to have him around!). So from now on, you can get the latest hex files from the BrewPi servers! Updating your Arduino in BrewPi 0.2 gives you live updates of the programming progress by displaying an auto-scrolling log.

BrewPi now checks whether another instance is already running at start-up and has various options to deal with that (status update, close, kill, replace).

Only the biggest are mentioned here, and its technical stuff. If you are reading this for fun you can stop here 😉

This release was a big step forward, but there is still a ton of stuff to do. So if you would like to help out, check out the BrewPi To-do List on the forums.

The shop is open again and everything is back in stock. Updating the soldering guide and install instructions is the very next thing on my to-do list.